At this time of year, my photography is mostly shooting NCAA Division 1 sports for the local college. Spring has yet to even hint at making an appearance in Central Pennsylvania’s mountains and valleys, and there was little that was photogenic about our snow crop this year. So I shoot mens and women’s basketball, indoor track and field, swimming and diving, water polo, volleyball and wrestling, waiting for the arrival of spring flowers, new life in the landscape, and baseball season. Indoor sports facilities have gotten brighter and more friendly for photographers over the past few decades, but the defining characteristics remain low light levels, cramped quarters, and speed. Furthermore, there is less tolerance of flash than in the past, and that is understandable if confining to photographers.

Most of my colleagues and competitors still use Canikon DSLRs, with monstrous zoom and prime lenses which reach focal lengths of 400mm. Their size and weight have forced these folks to hook their gear to monopods, a “camera with a crutch.” That has been offensive to me, and so when the first truly capable mirrorless cameras became available, I quickly sold my Nikon D7000 and D600, and my Leica R8 DMR, with all their lenses, to change over. Two bodies were my mainstays, the Panasonic GH3 and the Olympus E-M5. Luckily, they both used the same lens mojunt and so I had glass from two different companies from which ot choose. That was in 2012, and I have yet to escape the questions, taunts, and diatribes of guys who are jealous and frightened by the new style of equipment.

In the past 2.5 years, mirrorless cameras have steadily improved in the features which I find important in shooting sports especially. I think one needs sensors which capture clean files/images in very low light, and/or at very high ISO ratings, and lenses which deliver razor sharp images. Less important attributes are creamy bokeh, silent shutters, and f stops beyond f/16

With all of the above as prelude, I became aware in mid-February that Olympus was on the verge of introducing a new camera with interesting new features. I ordered one sight unseen, and it arrived in time for me to shoot the last water polo event of the month. I wanted to share my experience using the E-M5 MkII because i have yet to find online any review of the camera for sports and event work which places an emphasis
on speed. Let’s start with a couple of dramatic pictures, the shot of goal, and the pass to the wing. Both of these were taken from the opposite end of the pool at Kinney Natatorium on the Bucknell campus, The picture of the goalie was made using the Oly 40-150mm f/2.8 PRO lens. It would not have been possible with a micro 4:3 lens of only 100mm or a 35mm lens of 200mm. But I was not satisfied with the reach of the naked lens, and so I added the Digital Tele-Converter cropping. Now, I have the effect of using a 600mm lens on a 35mm frame. I was able to get a brighter image than many folks by using ISO 6400. I am impressed with the image quality at that high ISO, and I believe it exceeds what I can get in the same venue from my E-M1 (which I only dare shoot at ISO 5000.) The pass to the wing was shot using the Lumix X Vario 35-100mm f/2.8 lens which causes my colleagues so much consternation. Again, I am using Digital Tele-Converter to gain extra reach. To do the same with a Canikon, one must use something at least twice as long and heavy, and probably add a momopod. 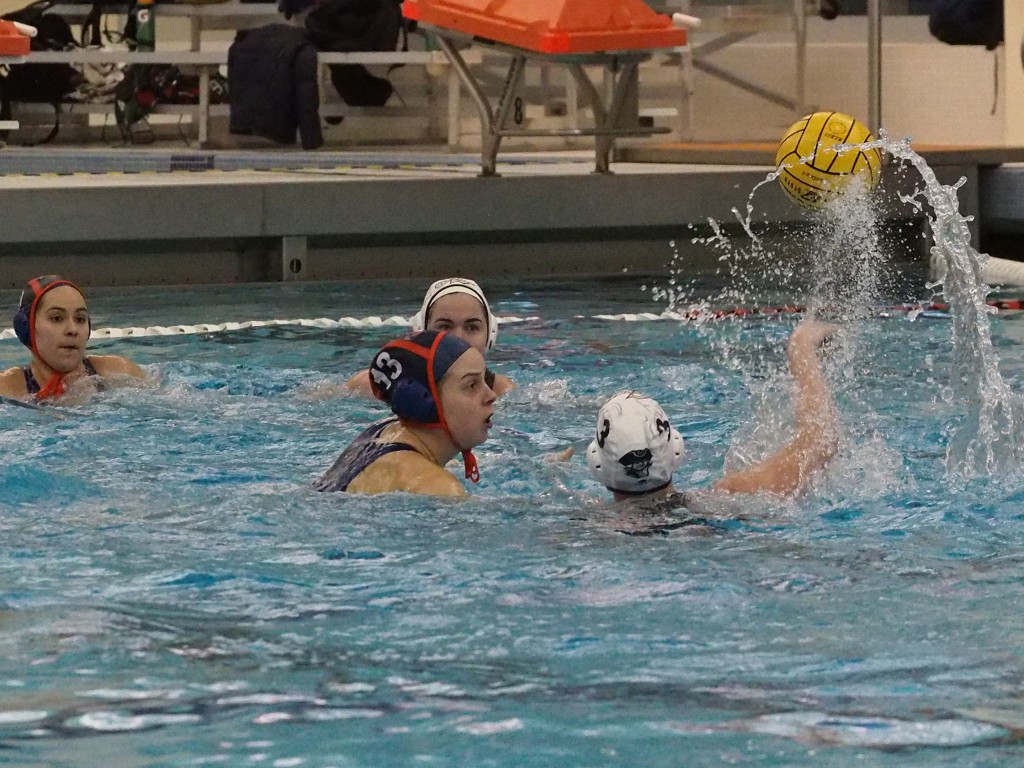 Examine the images closely and you will find that, while sharp, they contain a certain amount of noise in the flesh tones. It might be unacceptable in certain uses, but my work is produced for display on the internet, and for prints no larger than 16X20. If one were to use a medium format sensor and and ISO of 100 to 400, this image would never be captured. These images are cleaner than what I used to get from my GH3 and GH4, and the original E-M5. They are a bit better than what my E-M1s will produce, and about on a par with what my Fuji XT-1 can do. But here is where the hidden jewel of micro 4:3 comes into play. These images have noticeably greater depth of field than what an APS-C or 35mm frame can produce. That’s inherent in the technology, and it’s a benefit I am happy to exploit in my sports work. The girls in the second shot are not a couple of feet apart, as might appear – they are actually 8 to 10 feet apart, and my depth of field keeps them all in relatively good focus. I personally believe that depth of field is far more important in sports work than the currently fashionable bokeh. When I started taking pictures with quality equipment (Leica IIIg w. 50mm ‘cron) nearly 6 decades ago, we learned how to achieve selective focus with a variety of tools, not merely bokeh. I can still use them today. However, I can still not put back into a photo, sharpness which was never there.

I need to address some subjective issues in using the Mark II for sports work also. Foremost is the matter of focus lock. The optical view finder of a DSLR has been developed to inform the photographer at once if the image is in focus, and we have come to depend upon that. Such was not the case when I shot sports with a Leica IIIg or M3, or a Linhof or Graphic press camera. To a greater or lesser degree with the older film cameras, one had to learn to trust one’s equipment, and one’s knowledge, skill, and experience as to whether we got the shot correct. I found with the GH3 and the E-M5 that I had to do the same.Those cameras were good enough that I usually did get it right. But then along came the E-M1 and the XT-1, and now I get the same comfort zone as the OVF in a DSLR gives, and I don’t want to give that up. The Mark II can’t match the E-M1 or the XT-1. for the speed and locking of autofocus on an unpredictable moving sports target. In those situations where the sport produces high predictability, or ritualized situations, such as football or bull fighting, I anticipate no problems and expect to rate the Mark II as better than its predecessor.

When you shoot sports with a mirrorless camera, you tend to overshoot and to cull out large numbers of dull, or poor quality, shots: I’m usually producing 800 to 1200 shots per contest. That means my hands are gripping the camera constantly over a period of at least two hours (perhaps 8 hours at a track meet). The ergonomics of the camera assume a larger significance in such a situation. I found the Mark II to be equivalent, although different, to the E-M1 and XT-1, and noticeably better than its predecessor. (The GH3 and GH4 were also on a par.) I think I prefer the E-M1 and XT-1 slightly, but there is really very little to choose among the three.

To sum up my impressions and review, I spent two days at the very end of February shooting a water polo tournament in an environment which was hot and humid (85F and 90%, or worse) and darker than a good college basketball arena. I used all the ISO I could get, in order to allow a high shutter speed and moderate aperture. The Mark II performed well, but not as well as its top-of-the-line sibling. It is significantly better than the original E-M5 and I will not hesitate to use it to cover sports with high predictability, like baseball, basketball, tennis, golf, football, track and field, for example. Situations with more chaos or sudden movement, such as rodeo, lacrosse, soccer and field hockey, will likely find me leaving it at home in favor of the E-M1. I certainly intend to keep it in my bag, because I await the chance to use its video and high res capabilities which obviously exceed those of the E-M1.